It all works out for the best

Now, we're not believers in any particular greater power, but when you're hitchhiking you often start to see superstitions and patterns at work. I can only imagine that things happen as they were meant to be, and yes, we still think hitchhiking is incredible.

We spent Tuesday night in Yuma, Arizona, with Stina's first cousin once removed, Marcia, and her husband Dale and kids Brittany and Micah. We could have gotten a ride all the way to San Diego with a young couple on spring break from college, but we had these plans to stop in Yuma and figured we'd have no trouble getting from there to San Diego. So the couple dropped us off and we had a nice visit with family members Stina had never met before. 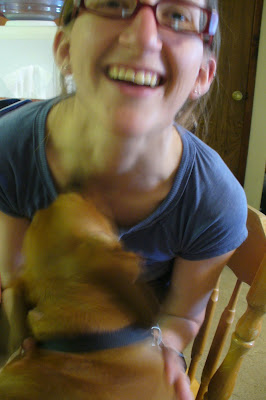 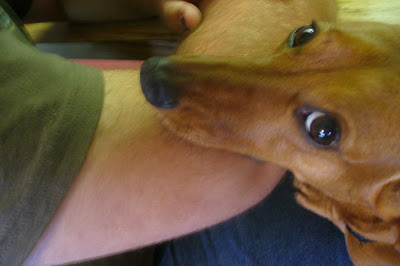 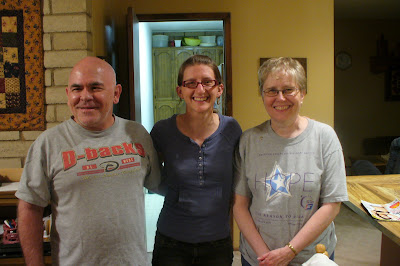 The next day, Wednesday, we got ourselves dropped off at a Love's truck stop at 11:40 AM and walked about asking drivers if they could take us to San Diego. Most were either truly full with people and baggage or said they were going east. When we went through the convenience store, a friendly employee asked about our trip and wished me luck. We went out the back to where the truckers fueled up, asked one trucker, and while we were asking him, I heard the loudspeaker say "Soliciting rides from truckers is prohibited" or something like that. Stina didn't hear it, but I guided her away from that area and we went to the sidewalk with a sign.

A fellow who was late for work said he felt really bad about saying no to us earlier, and took us back to Yuma where we could wait at the Circle K gas station and the onramp from the city proper. We waited there for another hour or so until a young Marine took us 2 miles out of town. From this spot we watched white buses hauling port-a-potties carrying migrant workers back and forth and giant trucks filled with citrus trundle by. We turned down a ride from a man who said he was only going to the casinos and that our current spot was better than where he'd drop us off (why he stopped to tell us that, I don't know. Perhaps he thought we might just be hitching to the casino). We waited another hour. This was the view: 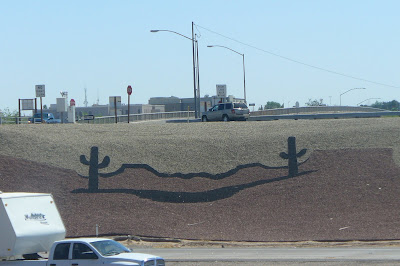 Finally, another older Marine (30-something) who'd served in operations Desert Storm and Iraqi Freedom took us to that casino exit. He seemed to either have short term memory loss or PTSD or something because he told us 3 times each that he was an alcoholic gamblaholic, got $2500 a month for disability, and asked us twice if we had children.

We were a little relieved to get out since he also kept offering us Jaegermeister and asking us if we wanted to join him in the casino or if we had any cash. By this time, we'd gone 7 miles in 4 hours.

One car per minute passed us by, and we were on an intersection with a route to and from Mexico. This time I clasped my hands together and an RV stopped for us. Mark, his mom, Alice, and their neighbor, Dallas, saw us on their way back to Palm Springs from Mexico where they had dental work done. They'd be on the I-8 until El Centro. About 40 miles down the road, amongst the sand dunes, Mark, a hot springs enthusiast, spotted an oasis, complete with palm trees lining a pond and everything iconic you can imagine. We all stopped for a dip for about an hour. basking in the 106 degree hot springs and swimming in the cool pond. If not for our earlier terrible luck, we never would have gone.

They dropped us in El Centro. After being warned by a state trooper that the only ride we could expect at the onramp would be one to the county jail, we moved to the sidewalk 20 feet from where we'd been, safe on city property. After not nearly as long as our earlier waits had been, 2 public health students from Tucson on spring break (also former peace corps volunteers from Africa) stopped and asked us, "How do we know you're not murderers?" We answered as best we could, and rode with their enthusiasm all the way to San Diego. They knew about Couchsurfing and seemed interested and supportive of our idea of legitimizing hitchhiking. They seemed to enjoy the story we told them (about reaching the top of a mountain on the back of an ant), and were so excited to have hosted their first hitchhikers that they took our pictures and promised to befriend us on Facebook. 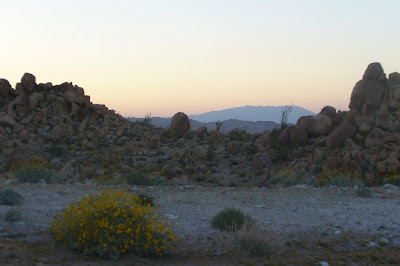 View from I-8 on the way to San Diego.
Posted by Brendina Pederhold at 9:44 AM