In Waco we broke into a house...

Yesterday we rode in the back of a police car. This was a first for both of us. Those things are kind of cramped! But any space feels cramped when my big pack is sitting on my lap. No, we were not arrested. Our couchsurfing host from San Antonio had dropped us off about 18 miles north of San Antonio after a full morning of the Alamo and the Riverwalk... 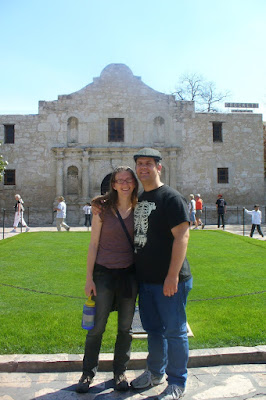 At the Alamo. I forgot that water bottle today in one of our rides.


Dancers we saw in San Antonio along the river.

We were right outside of a little town called Selma, and standing near a car dealership. It was not a great spot for catching a ride, or so we thought. Turns out it's a great spot to get moved along by the police. The cop that stopped said they've had some trouble recently with hitchhikers breaking into buildings, so they don't like hitchhikers to hitch in Selma. He seemed almost apologetic and said we didn't fit the description of the troublemakers, but he still needed to move us along. He drove us to a nearby rest stop and wished us luck on our journey.
We caught a ride next with a man who was born in Seattle, coincidentally. He said Austin is like what Seattle was about 30 years ago and that's one of the reasons he and his wife chose to live there. We enjoyed talking to him and he drove us right into the city, to 6th and Congress. We walked around a free contemporary arts center called Arthouse and then wandered towards the Capitol until it came time to call Gary, Brendan's uncle, to meet him.

We spent a delightful evening yesterday and afternoon today with Gary. He treated us to dinner at a Mexican restaurant last night (a very real treat indeed since we haven't eaten out in a restaurant in probably two months) and today we toured the Capitol. While Gary was in his conference in the morning, Brendan and I walked around the University of Texas campus. They have a Creative Writing MFA program, so I wanted to see if I liked the city and the campus. I do. 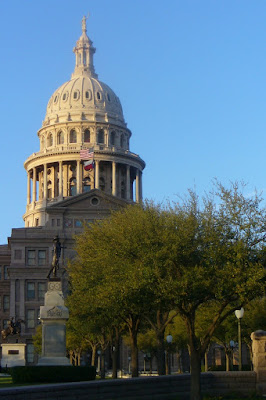 The Capitol building of Texas. 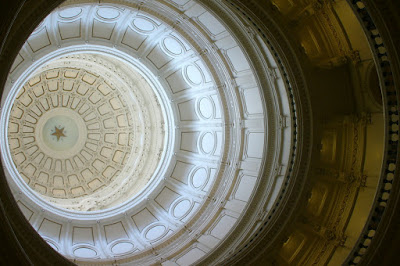 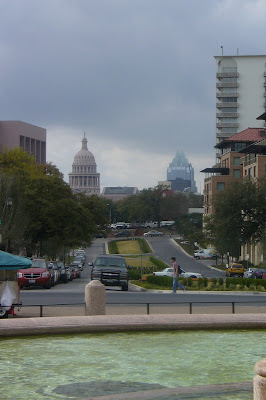 View of the Capitol and downtown from the campus of the University of Texas.
Oy. On to our hitchhiking ventures of today. We caught a short ride out of downtown with a delightful woman. This is the first time in our southern hitchhiking that we have been picked up by a solo woman, which I think is noteworthy. She was really nice and fun to talk to, and we exchanged contact information by the end of the ride. Our next ride was another short one, from a man and his pre-teenish daughter. Apparently she had been skeptical about picking us up, but he thought we looked okay and seemed impressed when we told him that we do street performance and hail from Seattle. They were also really nice. Can I just insert here that we have met so many super nice people while hitchhiking? It's the best of us that pick up hitchhikers.

A UT student who often picks up hitchhikers took us another twenty miles or so along I-35 north. He dropped us off outside a gas station and we approached a trucker who was parked there to see if he was headed north. He was on his way to Dallas and said he could take us to Waco, but he wasn't going to be leaving for another thirty minutes or so. We checked around with a few other people, and either they weren't going north or just didn't seem interested in giving us a ride, so we went back to the trucker. This was my first ride in a big rig! It was really fun. I got to sit on the bed in the back. He took us to Waco, where my good friend Cassondra picked us up. I think I was born to be a trucker. 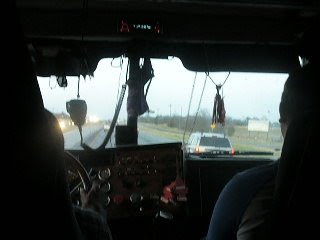 View from my seat.
Cassondra took us out for a delicious dinner at a local hole-in-the-wall type joint where they have "oriental fries." Oriental fries are all sorts of yummy veggies sliced very thinly, breaded, and fried. Yum. Then Cassondra drove us through the old downtown area and to the Baylor campus to see the bears. When we got back to Cass's place, she discovered her house keys were missing from her key ring. We looked around for them in the car, but they were nowhere to be found. We even drove back to the eatery to see if they fell out in the parking luck, but no luck.

We ultimately we went to Walgreen's and Cassondra bought some pliers so we could try and take the heavy-duty screen off of one of her windows and then climb in. Success! Brendan painstakingly unscrewed the hex-screws (I don't know what they're really called), and I climbed in and came around to open the door. And that is the story of how we broke into a house in Waco. Sorry it wasn't as exciting as it may have sounded from the title, but I'm tired.
Posted by Brendina Pederhold at 9:57 PM