Our lives here are slowly getting settled. I (Stina) initially planned to try and find a job, any job, as soon as we had an address here. Then we heard about background acting. We joined Central Casting, a casting company that posts available work for extras on a hotline. If you hear a job that you think you match, you call the number provided until you get through. The casting director pulls up your profile and says yay or neigh based on whether you match the look they need.

There are several good things about this kind of work:

But there's a downside, too. It's not regular work, and it's hard to get the work. When I hear something I think I match, I start calling on it immediately and inevitably get a busy signal. I keep on calling, just hoping to get through. Sometimes I do after half an hour and get booked, sometimes I do after an hour and don't get booked, and sometimes I give up after more than an hour. For Brendan calling the men's line, even the hotline is often busy.

We've been hearing a lot about call-in or calling services (they're called both depending on whom you ask). Call-in services are companies that book you for background work, thus saving you the trouble of calling the hotline and trying to book yourself. They cost anywhere from $60-$75 per month. We think we'll try to go with a call-in service for the month of January, just to see if we're able to get booked regularly.

But it's scary, not having a regular income, so I think I'll also try to find a regular job once we return after the holidays. We've got savings to keep us afloat for a few months, but after that . . . well, we don't want to arrive at a desperate situation.

I've been trying to think of jobs I wouldn't hate but that would also be somewhat easy to get. Working at a grocery store, maybe, so I can easily access what would otherwise be thrown out, and so we could get discounts on some of the more expensive fake-meat products I like. Something having to do with animals. Or maybe something that will allow us free access to something fun, like a museum or the zoo or a theatre.

But enough about that. We've been making some lovely friends here. We've kept in contact with the couchsurfers we stayed with when we first arrived, Ross and Dane, and we met another couchsurfer from Seattle, Sydney. We joined a role-playing group and really like the storyteller and other players. We've been getting to know Randy, another UW drama major, and making films with him. I met another writer, Craig Pitchford, randomly in the library, and we're going to start a writing group in January. Los Angeles is filled with kind people, but I guess that's to be expected. We meet kind people everywhere we go.

I guess that's the lesson I can take away from this post. Even with all the stress of money woes, the people we come into contact with brighten our days and offer solid game-playing and/or creative companionship. I will find a job, but more importantly, I will keep these friends beyond whatever job temporarily keeps us afloat. 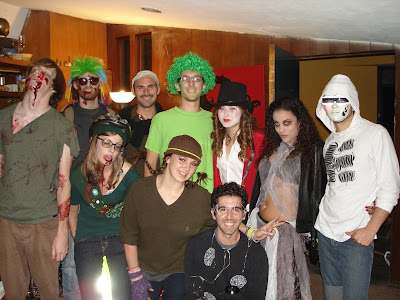 Ross is in green in the middle (he was a tree, or maybe broccoli),
Dane is wearing the rainbow wig on the left 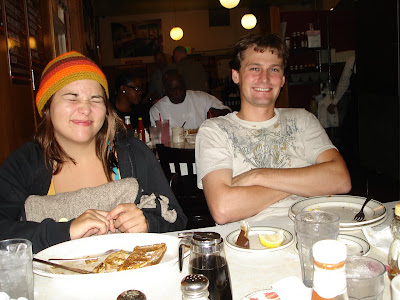 Sydney and Randy, at a late late dinner or early early breakfast after midnight Harry Potter 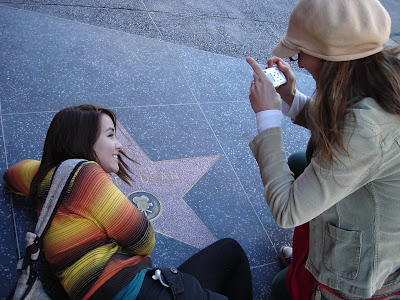 Sydney and me with James Dean
Posted by Brendina Pederhold at 4:48 PM No comments: