My desire to see my sister as soon as possible when she arrived at Tegel airport in Berlin did not outweigh my budget concerns about spending 25 euros each way to get there and back. It did, however, outweigh any apprehension I felt about hitchhiking alone. I knew the apprehension was illogical, anyway, based on all the conversations we've had with solo female hitchhikers, yet it was still there. The best way to get over it was just to do it, hitchhike alone, and yesterday I had a really good reason to try. I figured if I could get to Tegel for free, it wouldn't be so bad to spend 25 euros on the return trip since it meant I got to spend that much more time with Amelie.

I set out from home around 7:45am and took the #5 tram to Opernhaus, then the #9 tram to a stop at the north end of town, Krähenstieg. I was trying to get to an Aral gas station where Brendan and I had once tried to hitchhike to Hannover. We gave up that time after waiting for two hours and being offered several rides to Berlin but none to Hannover. I figured this was the perfect spot to hitch at yesterday since Berlin was exactly where I was trying to go.

The only trouble was finding the gas station. I took a wrong turn and wasted about 20 minutes wandering up and down the wrong street before I found the right one. By 8:45am, though, I'd made it to my spot, sporting a thumb on one hand and this nifty sign in the other: 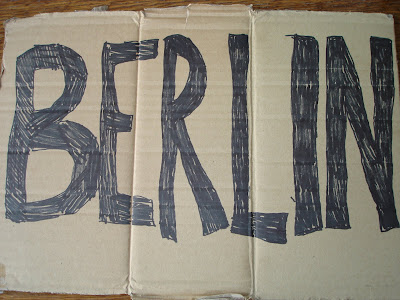 As soon as I was standing there in that familiar position any remaining anxiety disappeared. Cars passed me by and the people in them looked just as friendly and safe as they do when I'm hitchhiking with Brendan. Ten minutes later I had a ride with an on-the-younger-side-of-middle-aged man. He said he needed to make one short stop on the way, but after that he was going into Berlin.

We talked only in German and I was really proud of myself for what I was able to communicate to him and what I understood. He told me he had a twenty year old son and that he would like to travel to the US with him, but he wanted to improve his English first. I offered to speak English with him so he could practice, but he said "Überlegen und fahren geht nicht," which means "Thinking and driving don't mix."

I asked him at one point which city in Germany he thought was the most beautiful and had a little embarrassing moment where I didn't understand his response.
"Essen?" I asked.
"Nein, __________." (I still didn't understand.)
"Ezden?"
"Dresden."
"Oh, Dresden!"
Then we talked a little about Dresden.

He dropped me off at an U-Bahn station in Berlin around 10:30am. I didn't know to get from there to the airport, so I approached a young man and asked him, in German, what to do. He gave me clear instructions, I got a ticket, and hopped on the next subway.

The subway ride was long. So long, I worried I might miss Amelie's 11:10am arrival. I had to switch from the subway to a bus and by that time it was already 11:10am, so when I got to airport it was 11:25am. Thankfully her flight was a little late and had just landed at 11:19am. I asked at Information where I could find her, and got to the spot where everyone was waiting just five minutes before she came through the doors.

Together we navigated the bus to the train station and the train back to Magdeburg and now have an exciting week of visiting and sightseeing ahead of us.
Posted by Brendina Pederhold at 2:46 AM No comments:

Visiting a Castle and Friends!

I should have been keeping a blog of these experiences all along, but it just occurred to me now.

Today I heard something I've never heard before in English or in German. I've heard "So-and-so pushed me" or "So-and-so cut in line", and even what I thought was "So-and-so stepped on me", which I just learned actually means "So-and-so kicked me", but today was the first day that I heard "So-and-so bit me on the butt".
Posted by Brendina Pederhold at 9:05 AM No comments: