A family of five

On Thursday, Stina and I bought the Quer-Durchs-Land ticket (39€ for 2 people), and took a 6 hour, 3 train trip to Frankfurt (am Main) to meet our friends Lena, Adam, and their 1 1/2 year old daughter Ilya. We had hoped to get their early enough to meet them at the airport, but there were no reasonable options for that, so we got there at 6 PM, and found them moments later across the street at their hotel. After a quiet evening including some Chinese food, hugs, and this (see the video halfway down), we all bedded down for a few solid hours of sleep.
The next day started pretty early. We went out to see the city as soon as it was light enough to see what was there to be seen. We walked along the Main for a bit, and then saw some ruins from the 1st century C.E. From there, we wandered to the main square, Römerberg, and found some breakfast. Walking around after breakfast, we happened upon a street market, and about halfway through it, were accosted by a man asking "Thema der Woche?" into his ZDF mic. I told him the theme of the week was Americans in France, er Frankfurt, because WE were Americans in Frankfurt. He wondered if I cared at all about German's deficit, and I told him America also has one that I'm worried about, and that the solution is to spend less, not more, because, and here's my quotable quote for the day "Consumerism breeds consumerism". Later we decided that what I meant was that, since any economic problem is only really a problem if people are not getting the things they need to live the happy lives they deserve, the solution to the problem is to make more goods available to them. Aside from increasing production, that can also be accomplished by not consuming the goods yourself. then they'll be available for other people to consume. This is contrary to what capitalism teaches, which is, if you consume more, everything will be okay. I generally find that when something is counterintuitive, it is, in fact, wrong.
But that was just a brief moment of our day.
We asked a security guard for directions to the Apfelwein. He directed us across the Main, where we enjoyed the company and giant glasses of Apfelwein. From there, we went to the park near the river, and we demonstrated the powers of the fulcrum and lever and pendulum.
Back at the hotel, everybody crashed, conveniently in phases. First I passed out, then Lena went, then Adam. Then I woke up and Stina passed out. Then Adam and Lena woke up. Then Ilya and Lena went out. Then I went for a walk to get some Döner Kebap and Falafels for us. When I got back, Stina woke up and we scarfed them down, read a little (I'm reading about the moon landing, and hoping I can someday be in a position to travel to the stars, or maybe write a show that compiles faux news articles about life aboard the generational starship), then went for a walk. Having Lena and Adam here really reminded us how much we want to travel, so we're figuring out budget stuff and where we want to go. I theorized that in order to enjoy our travels and live in the moment (as we haven't been as much), we both need to know that at the end of the moment we have a place to belong, and that nothing stressful is waiting for us at that end. So, we need a home base. We have a home base. Awesome!
We came back to the hotel, and went to sleep. Then Lena woke up, ate, and then we ALL slept.

Next morning, we dilly dallied until we wandered over to the train station for the ride back to Magdeburg (Schönes Wochenende Ticket-37€ for 5 people). This time, though, we had a mobile entertainment unit: Ilya. Now we're having a lazy Sunday as our first day as a family of 5.
Posted by Brendina Pederhold at 3:21 AM No comments:

There is snow on the ground and like good bears, Brendan and I have been hibernating. We get a daily dose of sunshine and snow enjoyment, then return indoors to our cozy cave. All our plans for traveling during this winter break fell by the wayside, and I blame the cold. I want to hitchhike and spend lots of time walking around the unfamiliar cities we visit, but when it is wintertime the biting wind pushes me home to the warmth of the great indoors. So here I sit, wrapped in a blanket, like a cozy little ladybug . 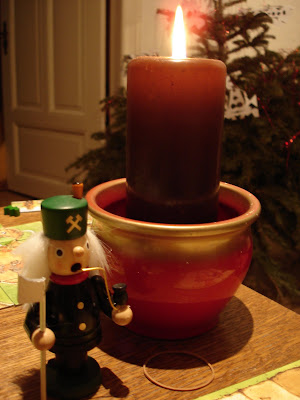 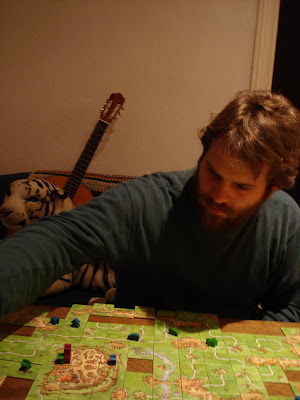 We have so many expansions of Carcassonne now that it's not easy to play them all at once. We have been honing our skills so that when our Seattle friends join us here we will be able to compete. They are the ones who introduced us to the game, after all. In the background you can see the beautiful guitar Brendan gave me for my birthday and our pet tiger. 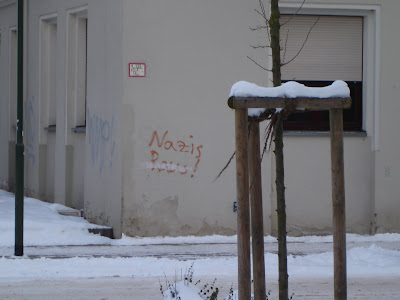 You'll see graffiti like that all around Magdeburg. On January 16th there will be some sort of an anti-Nazi demonstration, with different events taking place all over the city. Brendan and I will attend. 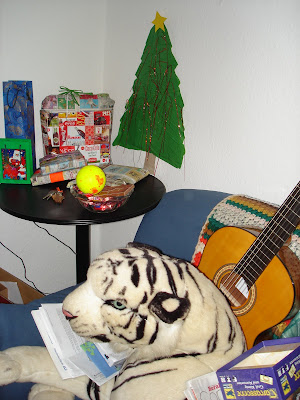 That's the little Christmas tree I made before I knew Brendan would be bringing one home. We still kept the presents under this tree, though we put the decorations on the other one. 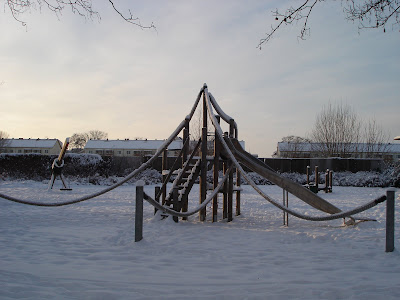 This is the playground near our house and I took this picture primarily to show our Seattle friends where their little one can play. The ping-pong table is barely visible in the background, though recently it was impossible to play on. Not because of the snow, which we expected and brought along a brush to sweep away with, but because of the fireworks residue from New Year's Eve. 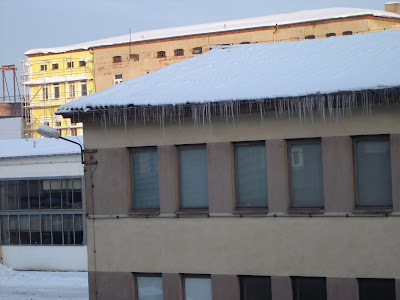 This is the building behind ours. I thought the icicles looked cool. 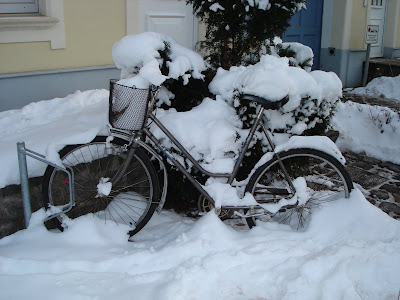 This is a snow-covered bicycle. 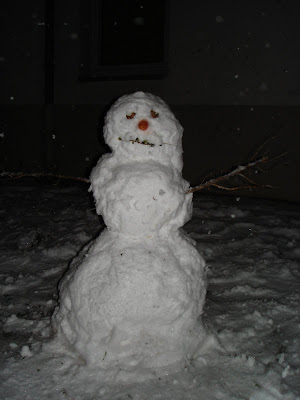 And this is our pride and joy. This snowman was with us for a sadly short while. First, he was defiled by a dog. That I could handle. But then he was toppled and we found him in pieces. His nose is still missing.

Happy 2010, everyone! This is our wedding year and I am getting excited! 10/10/10 is marching ever closer, perhaps to the tune of Pachelbel's Canon. Nah. How cliche would that be?
Posted by Brendina Pederhold at 8:32 AM No comments: