In Phoenix, beautiful desert but being sick sucks

Our lack of sleep that night in the truck stop seems to have compromised our immune systems. We could have caught anything from anybody. We travel in so many different cars, use many various restrooms that have been visited by hundreds of various people, and hug kids that are recovering from or just coming down with some bug or another. The bugs in our bodies have declared: 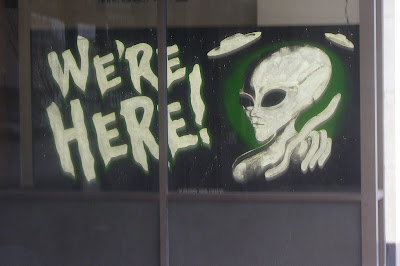 I (Stina) am not doing too poorly. A bit of a snotty nose, a slightly sore throat, that's it. Brendan feels in pain all over and his head is all stuffed up. We still plan to leave Phoenix tomorrow but may delay our travels by a day if he's not feeling better in the morning.
On Friday late-morning we left Roswell after buying a few postcards. There's not really much to do in Roswell but visit the UFO museum. We didn't pay to see the whole thing, but we wandered through the gift shop. FYI, they have the cheapest postcards out of the few shops we checked ($0.35 each). The man who picked us up was really only going to the edge of town. He'd planned to pick up a friend and get drunk. He was in town because his father had just passed away, and he and his sisters were busy taking care of their mother, who has Alzheimer's and is showing signs of dementia. He ended up taking us all the way to Ruidoso, which is at least 30 miles down the road, because he said doing something kind for us was better than spending the afternoon drinking.
He also gave us $20. This is the second time in the past few days that someone has given us $20. The first was in Seminole. We'd just gotten dropped off by the trucker and were walking towards the edge of town, to find a good spot to hitch. An elderly man in a pickup truck pulled into the parking lot we were passing through and said "Y'all traveling? Here's a little something to help you out," and handed us a twenty dollar bill. I simply took it and said thank you. In the past, we've turned away offers of money, because we really don't need need it and feel bad about taking it. But I think I've gotten over feeling bad about it. If people want to be generous and help us out, why not take it? We don't go around asking people for food or money, but sometimes people just see that we're traveling and assume we need money. Maybe it's because we're hitchhiking, and we must seem poor to be doing that. But in the case of the elderly man, we didn't even have our thumbs out. We were just walking along, with big old packs on our backs.
As I type this I realize that my declaration that we don't ask people for money might seem at odds with the donation button we have on our website. With that, we hoped that people might be interested enough in the radio play we created to give us a few bucks. People who've donated have been much more generous than we ever thought possible, and even with that I feel a little bad taking large donations. But again, if people want to be so generous, why should we say no? It gets to be a matter of pride, I think. We don't want to seem like we're begging, and taking money kind of makes us feel like we are. When we deny people the chance to give us something, though, I think it just makes the giver feel bad more so than it makes us feel good. So while I'm not going to start asking people for money, I'm not going to say no when someone freely offers it.
In Ruidoso it was at least ten degrees cooler than it had been in Roswell, where the day had started off at about 41 degrees. There were snow flurries and it felt like Chicago all over again. We stood there stamping our feet and looking forlornly after every car that passed us by. Thankfully it only took about 15 minutes to get a ride. Our next driver turned out to be a couchsurfer from Tucson who was in town to learn to be a tattoo artist. He wasn't going too far, just to Mescalaro, but even that little bit put us in much warmer weather.

Our next ride was from a woman who says she never picks up hitchhikers, but something told her she should pick us up. We could barely fit our packs and ourselves in her car, but we managed, and she took us as far as Alamogordo. She seemed to be searching for things to talk to us about, and Brendan thought she was searching for an answer to why she felt driven to pick us up. I don't know if she found it, but maybe it was simply that she be reassured that hitchhikers aren't dangerous. The sky was beautiful in Alamogordo, but I'm having issues posting pictures right now, so that will have to wait.
I also just heard that dinner is in five minutes, so I should wrap up and see if I can help set the table. Next post will shortly follow, with more hitching stories and pictures of the really cool Saguaro Cacti.