Yesterday we went to Balboa Park. While there, I phoned John Johnson (aka Looney Dooney the Clown). John's ex-wife knew my father 29 years ago, and arranged for John to sleep on my dad's couch for 6 weeks when he first moved to Seattle. When my mom heard we would be in San Diego, she found him online and told him to look out for us.
He met us at Balboa park, and brought along his toys. He taught us how to make balloon animals and hats (and gave us some balloons), and he demonstrated his airbrush face-painting invention. Awesome! He really knows what he's doing, and he knows how to teach. In the few short hours we spent with him, we gained more potential busking skills than in the weeks we spent throwing balls at each other (though that was valuable and fulfilling, too). We managed to partially blow up a few balloons, and that was like realizing I could make people laugh for the first time. I couldn't stop grinning to do it again. That might be our future. At the very least, if we do YTN birthday parties again, we can offer balloons, too. 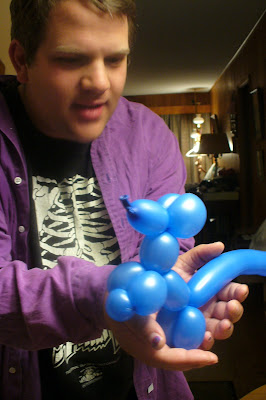 Next, today we visited Stina's great-uncle Albert and great-aunt Stina (her namesake), then played in Balboa Park. We danced in the formal garden and crashed through the underbrush of a golf course. Altogether an active and delightful day. Tomorrow we're off to Huntington Beach for some beach sun and ocean, then hitching on up to Tulare. So far we've only had a couple rides in CA, and it's seemed a bit harder than other states... but first impressions are sometimes nothing. We'll see tomorrow.
Posted by Brendina Pederhold at 10:40 AM

Hi guys! Love the balloon. If it doesn't travel well you will have to make a bunch more when you get here. The kids will love 'em.

A small correction. My ex-wife was a friend of Dooney's then wife. Harriet called me to ask the favor and since the house on Latona was a 2-bedroom house, they took one bedroom while I kept the other. The couch I had was the one we have now and would have been too short for Dooney, not to mention too small for a couple.