This might be long. Hitchhiking long distances garners so many stories! Yesterday morning, after a night of nearly no sleep inside the Flying J, we headed out with Larry, the trucker we'd met the previous night. He treated us to a lovely breakfast, then we all went to the food corporation where he was dropping off his current load of cottage cheese. From what he knew, the place made frozen french fries, and he couldn't figure out why they needed cottage cheese.

While they were unloading, Larry called to find out about his next job, which was supposed to take him to Clovis. This would have been great because he could have dropped us off in Carlsbad on the way. Alas, the next load of cheese he was supposed to pick up wasn't ready, so they were sending him to Brownfield instead. Carlsbad is not on the way to Brownfield. But, since it was cold outside and kind of drizzly, and we were sitting in a nice warm truck and Brendan was already falling asleep on the bed in back (see below), we decided to stick with him as far as Seminole. Seminole to Carlsbad is about as far as Pecos to Carlsbad, but it was still early and we hoped we could catch a direct ride from Seminole. 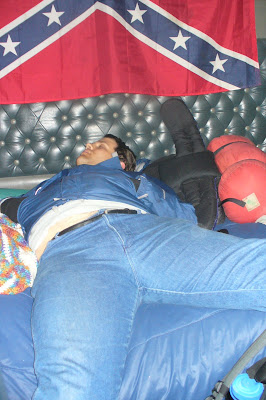 Larry was an interesting fellow. He had a gigantic confederate flag hanging in the back of his truck, but we never talked about that. We found out he didn't like kids though he had some grown-up ones of his own, he'd been a trucker since 1972, he owns the #4 cutting horse in the state of Texas, and he'd previously had a bad experience with a hitchhiker. He'd met the guy in his hometown and was going to take him west on his next trip. He invited the hitchhiker to stay in his home until they left. When the hitchhiker was alone there, he tore the place up, apparently looking for money, and was gone by the time Larry got back. I hate it when hitchhikers give us a bad name! But it must not have jaded him too much, since he still agreed to give us a ride.

From Seminole we got a ride with a couple of guys who had started their own biker church in Seminole. One was from California, and the other from Florida, and they came to Seminole because of their wives, who have family there. The one from California has a nephew who lives in Tulare, CA, so we took down his name so we might be able to find him when we're there. They took as far as Hobbs, which is in New Mexico.

Our next ride was from an ex-hippie. He had actually been to Woodstock! He said he didn't remember much of it. He was headed to Artesia, and hadn't planned on going through Carlsbad, but gave us a ride there anyway. He was a really interesting fellow. He's traveled all around the world, was an artist, but then studied Economics so he could get a real job and support his family. I don't think he put it that way, exactly, but that's what I gathered. He seemed rather jaded regarding art. He said, "It's a business" and seemed unhappy that it's just all about getting a wealthy patron for support. It brought up the question again for me, what makes art art? But there hasn't really been time to dwell on that.

We did a little grocery shopping in Carlsbad because we were running low on food, then put out our thumbs, trying to get to the caverns. I haven't really mentioned in yet, but keep in mind that the weather had turned very cold. We stood there shivering as we waited, and then a wonderful woman picked us up. She wasn't headed to to the caverns, but she wanted to help us out, so she drove us there anyway. She was so nice. She was born in Las Cruces, but hasn't lived there since she was 11. She has only lived in Carlsbad for about six months and can't wait to leave. She lived in San Antonio before that, and wants to move back. She said she had a friend driving to Phoenix on Monday and that we could probably go with. We would have taken her up on it, but it turns out her friend leaves on Tuesday, and we don't want to wait that long.

She gave us her phone number, then dropped us off right in front of the visitors center, and we visited. We did not go through the caverns. In our quest to save money, we make funny choices like not spending money on caverns and yet occasionally splurging on a hotel room (that's where we are now). I'm sure not all caverns are the same, but we have been to caverns before, so visiting these ones just wasn't high on our priority list. But we did really want to go camping in the national park. So we got a free back-country camping pass, and found out where we needed to go to get to the Rattlesnake Canyon trail. Remember how we hardly slept at all Tuesday night? I'm really, really thankful neither one of us tripped and hurt ourselves hiking to where we camped. We made it there safely, though, and the lack of sleep from the night before helped us sleep really solidly even though we were on this rock: 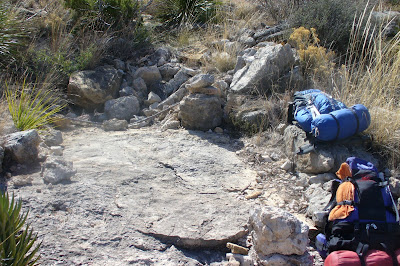 We had a tent, don't worry!

It was so beautiful. This was one of the most rewarding experiences we've had on our trip. It feels so good to work hard to get somewhere and then get there and say goodnight to our own echoes and then sleep well and get up the next day to strange unidentifiable drum-sounding beats and sunshine. 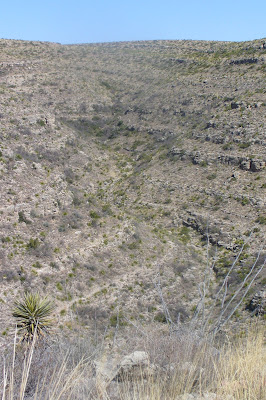 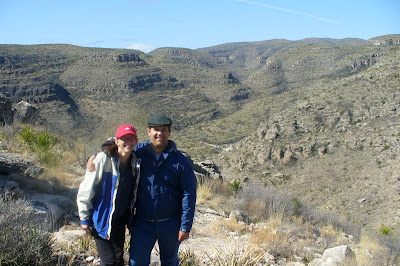 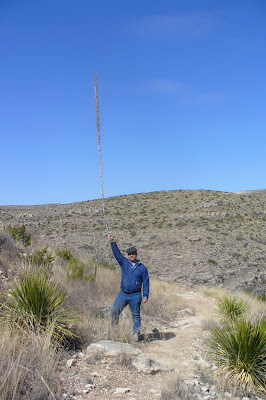 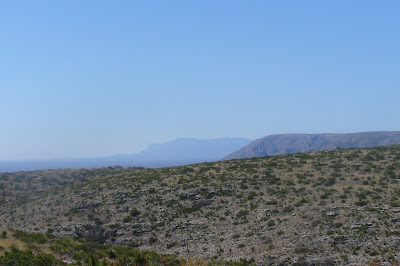 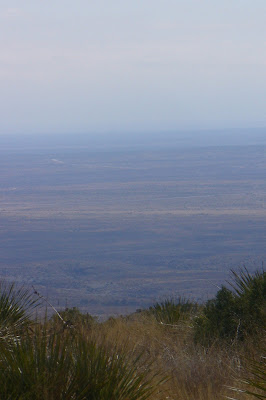 Even in the cold, cold weather, our sleeping bags worked well and kept us warm. We slept soundly from about 8pm until 4am-ish, tossed and turned the next two hours, got up and stretched, and slept again for a couple more hours. Today we got a ride down the mountain from a man from New Jersey. He was really nice. He came to Texas to go to a wedding in Austin, but took some vacation time to come early and see Big Bend, and then also decided to see the Gaudalupe Mountains and Carlsbad Caverns.

He dropped us off in town, and our next ride took us all the way to Roswell. It was from a young man who trains horses. He's lived in Artesia since January and has had a hard time meeting people. He was only going as far as Artesia, but offered to take us all the way to Roswell. He said it was the best conversation he's had in month and half. We really enjoyed talking to him, and told him about Couchsurfing.com, and it sounded like he would actually check it out. In Roswell there was only one couchsurfer that had a "Yes" status for hosting, but he was not able to, so we decided to splurge on a hotel. I've never been so thankful for a hot shower and internet access. It's kind of pathetic, actually. I'm so used to these creature comforts that two days without them seems more like a week.

We've been passing out our business cards right and left, and I'm really curious to know if anyone who gives us a ride ever checks out our website. Since so many people subscribe to blogs through RSS feeds, it's hard for us to know how many people regularly read our blog. If you are reading this, would you be willing to post a comment? Just a simple "hi" would do. I'd just love to have an idea how many people are reading. Thanks, and goodnight for now.
Posted by Brendina Pederhold at 8:16 PM

I can't believe you didn't go into the cavern! I've never been in any other caverns, but visiting Carlsbad Caverns is one of my favorite childhood memories. I've always wanted to go camping in the park, though. Good for you.

Relieved to hear you didn't encounter the predicted sleet while camping!

Hi! Just reminding you that I *do* read your blog and love hearing about what you guys are doing. I'll give you a call sometime so we can talk.

BTW, your camping pictures are awesome. I wish I could have been there.

Hi guys! I keep up with you on RSS. I love having all my sites in one place- especially with an active Aiden, anything that allows me to actually read content is awesome.

Anyway, your adventures sound pretty awesome and make me miss when i used to travel around in my van.

Hi you guys! Love from Seattle!

Not sure I did this correctly. Thx for prompt to post, hope this comes through. You must have angels watching over you, so many good hitch-hiking experiences. Love, Daddy