The sense of fullness and happiness is almost unbearable.

Belmont lies cuddled in Stina's arms, and I am about to write a blog about how wonderful it is to pursue your dreams, and, almost literally, live them.

My career is feeling gang-buster-ey. I had several auditions last week, and while I didn't get the job in any of them, I felt happy with how they went, saw room for improvement in myself, and got positive and constructive feedback from the people auditioning me. I'm meeting weekly with a group of actors in L.A., and have made contact and will be meeting with other groups of filmmakers and actors around L.A. I qualified for The Groundlings professional track courses, and plan to take them in a few weeks. A children's theater company is interested in my directing a show for them. Finally, the subject of today's blog is about the amazing experience Stina and I both had on the set of Transients yesterday, where we performed as featured, if silent, players in a visually stunning and socially powerful movie with a target release date later this year.

I haven't mentioned it to the blogosphere before, but I've had an occasional recurring dream theme since childhood in which I am working as an actor alongside actors I admire but only know from their work. In general, the dreams tend to focus on what I can or should say or do in a professional setting to interest my fellow artists in working with me again. When I was a child, it was almost always Billy Crystal. Since moving to L.A., it has been a number of different actors, including Felicia Day of The Guild fame.

Two weeks ago, I answered a Craigslist ad looking for a stiltwalker. I sent the poster a link to my newly created website: www.andjuggling.com/brendan. The director responded soon thereafter (while we were with Stina's mom on our Disneyland Vacation, actually. Thank you, mobile phone internet!), and was interested in using Stina as a stiltwalker and me as a Living Statue in a scene set in an art park. The shoot was on location in Redlands, CA, about an hour away from L.A. by car, so we could only do it if the film could provide transportation for us. Rhianon Gutierrez, the director, assured us she would find a way to get us out there and back, so we agreed.

Jordan and Ariel arrived a few days later, and we had a grand time playing games with them, and talking about the world, puppies, kittens, and internet memes. Stina worked and I had auditions and interviews, but they amused themselves and Belmont while we were away. On Thursday, we went to the Santa Monica Pier and beach, and while there Michael, our CS friend from NOLA and NYC, called to let us know he was going to be in Los Angeles that evening. Later that day, we also learned that the transportation Rhianon had arranged for us would pick us up the night before and take us to a hotel in Redlands so Stina could be on set for a 6:30AM call.

Momentarily panicked, we asked Jordan and Ariel if they could watch Belmont overnight. They said yes, and, as luck would have it, that left a bed available for Michael to spend the night, too.

We had a nice, busy apartment for a few hours Friday evening, catching up with Michael and saying goodbye to Jordan and Ariel, who left the next morning for San Francisco.

At 9:45pm, our ride, Eric, one of the producers of Transients, arrived to take us to the Howard Johnson in San Bernadino. I felt like Eric looked out for us while on set, making sure we knew when we would be needed and looking for opportunities for us to shine in the film. He's also a director, and we talked about future projects of his on the way down...some of which might have a place for me. Stina and I shared a room with another couple, one of whom was the ASL interpreter for one of the PAs and the other of whom was an extra. We awoke at 5AM, grabbed a couple bagels from the lobby, and headed out to the set with Eric, where we met Rhianon and the other cast and crew of the movie.

Coming up in a moment, you will see Stina and me flip out with excitement. Rhianon is a very welcoming and capable director. She made us feel valued, respected, and like a part of the team of filmmakers who had been working on this project for almost a year. Rhianon took us around and introduced us to the ADs, the PAs, the make-up artists, and the cast. The woman being made up at the moment looked tremendously like another actor we had seen. A few moments later, Stina and I compared notes. We both worried that some ableist idea had reared its head. We saw one female actor in a wheelchair, and our brains jumped to the conclusion that she was the same actor we had seen in a wheelchair before.

We asked Melanie, the AC and an actor in the film (and UW SoD alum! We're going to her creativity jam on Wednesday.), if our brains could possibly be telling us we were, in fact, not ableist, and rather in the presence of unexpected awesome.

Turns out, we were in the presence of unexpected awesome. Stina jumped up and down a few times while I smiled broadly and gasped for air. Teal Sherer of The Guild fame had just shaken our hands, plays the lead in Transients, and was about to be in scenes with us. I immediately turned to the education my dreams had given me, preparing for this opportunity of a lifetime.

Between takes in the scene where my living statue character tells her Sandrine character "make your own story" with his eyes, I managed to overcome my shyness, tell Teal what fans we are of her work, and tell her how excited we were to be on the set with her. She responded with such openness and friendliness that we became friends. She told me a little about her production company and the work it does. I learned a little about a project her company did, which she called a "devised" project: essentially an original, ensemble-created work.

I think every serious theatre artist wants to do the same thing. Melanie talked about creativity jams; the Tiles project, before it was scrapped, was all about collaboration; all of Nikki's and Alissa's shows have varying degrees of original, ensembly goodness; and you know it's why I make theatre.

After my scene finished shooting, I visited Stina at one of the picnic tables, where she and the body artist working on her had been at it for three hours already. Tracy Kiggen and her assistant, Braidy Connolly, transformed Stina's upper body into a garden of flowers over the course of nine hours. 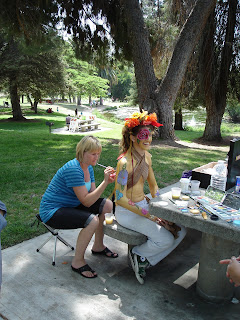 Eric came by to let me know that the film would like me to walk on my stilts in the scene as well, and they'd be careful not to film my face so that no one can tell I'm the same actor as the red man from earlier in the scene. Poor Rhianon could do nothing about the fact that there was no costume for my stilt-ness, and we made do with my plain, old, un-artsy jeans.

Ali arrived and told me about Pazookies, a cookie covered in ice cream that everyone seems to agree is a must-try. Ali was Teal's umbrella holder and jacket placement expert. Yep, she had an umbrella holder. Such a diva. He's also her boyfriend.

Stina strode regally across the set. She waved her magic bubble wand and led the audience around the art park. Folks enjoying a day in the park asked for pictures with her. She hugged trees and maneuvered around sculptures as if she were born on stilts. You'll have to watch Transients to see it.

After a 12 hour day of being on set, we met Rhianon's family, and then Stina and I were driven home by Rhianon and Alex, the film's editor. Rhianon treated us to some In-N-Out burger. It was our first time at the legendary Californian restaurant. We talked about our visions for theater and film, and made indefinite plans to play games in the not-too-distant future. We made movie magic yesterday, and I'm sure we'll do it again sometime. I'm sure.

What a fantastic story!!!!!!!!! I love it. Stina looks very pretty all painted with flowers. I,too, believe in signs. It's nice hearing that they do come true in some way, shape or form.