Traipsing has its consequences, a blog about Lyme Disease (Yay for doctor friends)

So, I have Lyme Disease.

On the Saturday of the Grilled Cheese Invitational (at which we took 4th), they put wristbands on us to signify our participant status. A few minutes afterwards, I noticed a welt on the palmside of my wrist. I blamed skin irritation from the wristband and ignored it.
By Monday, a few more hives had appeared and we worried that Belmont had fleas or I was having an allergic reaction to something.

By Saturday, I had lots of hives, and we were trying to eliminate allergens from my environment. I bought Benadryl and anti-itch ointment, but it wasn't having any effect on the hives.

On Tuesday I noticed the classic bullseye rash.

I worried. I read internet articles about Lyme disease. I contacted Jocelyn (our friend who just finished med school in New Orleans). I told Stina my fears via text. I sent a picture of the rash to Jocelyn. After seeing it, she agreed it was suspicious, verging on pathognomic (my new favorite word, look it up!). 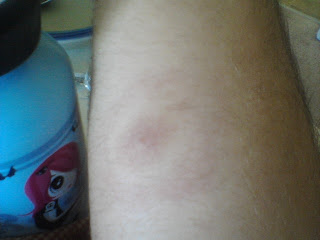 On Jocelyn's advice, I sought a medical practitioner in my area. There's a low-cost clinic about a quarter mile from our house, so I walked down there.

The clinic only accepts new patients at 7AM, so, reassured by Jocelyn that a few hours wouldn't make too much difference, I waited until the next morning and arrived at 6:45 AM. I stood at the end of the already 40 person long line waiting for the doors to open. Once the line started moving, I soon came to a person who asked my name and wrote it on a list.

Inside, I and the 3 dozen other people took our seats while the woman who was writing down names explained the procedure for getting to see a doctor and what to expect in Spanish. She did not translate it into English. I was the only person in the room who did not speak Spanish. I went up to the counter afterwards, and she explained in English that I would wait until 11AM, then, if they thought they would be able to see me in the afternoon, they would ask me to come back at 1PM to continue waiting. There were no guarantees that I would be seen, and if I couldn't be seen after waiting all day, I could come back the next morning at 7AM to wait again.

I thanked her and re-took my seat and texted with Stina and Jocelyn about how I was feeling and what was happening. There were at least 60 people in the waiting room above the door to which read a sign "Maximum Occupancy: 40 Persons", and another 20 in the children's play area. I worried I wouldn't be seen. After 2 hours, another lady behind a desk (I don't know if they were nurses. I assume so.) called me up, and asked me for the reason for my visit today. I told her about the rash, and then went back to my seat. After 2 more hours, the original lady called me up and told me to come back at 1PM.

I went home, took Belmont out, re-charged my phone, half-heartedly looked for work on Craigslist (What if I were still waiting at the clinic tomorrow?), and ate lunch. Then I went back to the clinic. This time I brought a book (no magazines in the waiting room, sadly).

I went up to the lady behind the desk and told her I was back. She politely but disinterestedly waved me back to a chair. I read my book and texted with Stina and Jocelyn. I told Jocelyn I realized more medical professionals were needed. She responded that I could probably finish my first year of med school while waiting in this clinic. True.

Around 3:30, the desk lady called me up and handed me some papers, promising there was a space available for me if I could fill out the paperwork really quickly. So I did. Faster than she expected, I think. And by 4, I was talking to a nurse practitioner.

First a nurse or orderly or volunteer or intern or something took my blood pressure (fine), weight (50 lbs more than I'd like it to be), and checked my blood sugar (86 - not diabetic).

Then came the moment I'd been waiting for. I told my medical caretaker about my symptoms: the progression of the hives, and the appearance of the bullseye rash. She took one look at it, said yep, Lyme, then asked me about a host of other symptoms. I had none of the other symptoms. She told me she was going to check on what the United States recommended dosage was of Doxycycline for Lyme (from which I inferred that she was from ... somewhere south of the U.S. Mexico, perhaps).

I thanked her, waited for the pharmacy, etc. Got the Doxy.

I took the first pill that evening around 6pm, making sure not to have any food in the 2 hours before or one hour after. Thursday I took my pills in the morning and evening. Then Friday morning I took my second dose at 8:30 AM. Friday night, I took a pill around 11PM.

During this time, we worried about whether Belmont might have Lyme disease and what we should do. Stina remembered that we had gone traipsing through an overgrown stairway between streets two weeks ago. We decided it was most likely I had picked up the tick there. Stina was carrying Belmont through the growth, so it was no more likely that he'd get Lyme than Stina, and neither of them have any symptoms, so we decided not to worry, and make sure to have him tested at his next regular vet visit.

This morning (Saturday) I awoke around 8:30AM after a fitful night's rest. I kept dreaming that I was crushing Belmont in my sleep. He was fine, and very happy to be firmly snuggled between Stina and me.

My right thumb felt mildly swollen. It also looked mildly swollen. I started to worry. One of the things the doctor had said was that if I felt muscle pain or joint pain, then the antibiotics weren't working, and I should go to the emergency room. Was this what joint pain felt like? I took my pill at 9AM and emailed and texted Jocelyn, then searched the web. The search turned up plenty of stories people told about how the dosage of Doxycycline I was being given wasn't nearly enough and other such worrisome horror stories. I do my best to trust the medical professionals rather than the internet, so I decided not to worry about that. I couldn't figure out whether my slightly swollen hand was something to send me to the ER or not.

So, we looked up a medical hotline. The lady at the other end told us to tell the doctor treating me about the new symptom. I told her the doctor treating me was at the free clinic and I couldn't get ahold of her. She told me to go to Urgent Care. Hmm. I called the free clinic, which is open until noon on Saturdays. The lady at the other end said they couldn't see me today, but that I should stop taking the Doxycycline and come in on Monday. No, they don't do appointments, but she can transfer me. She transferred me to a voicemail that said, and I quote "Hello, the party you have reached is not available. Please leave a message for at the tone." No name or otherwise helpful information. I left a detailed message. Maybe they'll return my call.

Alright, time to tap in a new doctor friend. Britt, Stina's Cousin's Wife, also just finished med school. After explaining the situation, she thought the swelling was within the realm of normal. The way I understand it (all factual errors are mine, not Britt's), the Doxycycline builds up in your body. Now, after I've taken 4 doses of it, it's finally starting to work. It breaks open the bacteria, and my immune system attacks the bacteria. The swelling is because of what my immune system is doing. It's expected. There's not a lot of swelling (no pitting), and the pain when I press it is just a two (On the scale of one to ten, but my scale is more reasonable than this guy's. My ten is the appendicitis of August 2008, May 2009, August 2009, and October 2010.)

Jocelyn agrees with Britt's diagnosis. Yay for friends who are docs. I want to be a doc, too. So, I will continue to take the Doxy, and if the swelling isn't better on Monday, I'll go in to the clinic and see what they can tell me.

It's obnoxious, and I hate the hives that I'm still getting, but cross your fingers for me (or, you religious folk out there can do your equivalent of that if you want) that all will be well.

My elbow is feeling a little tender, much like my ring finger (though not my thumb). The spots are warm, but not super-hot, and the swelling is minor, pain is minimal, itchiness is perseverant.

Check in with me on Monday and see if it has all gotten better.

P.S. It has all gotten better.
Posted by Brendina Pederhold at 3:31 PM

As i understand it you have to take BIG doses of antibiotics. Maybe you need more. I hope you resolve it on Monday.